In one of the most unique collaborations I have seen lately with The Andy Warhol Foundation (the ever-licensing organization also recently partnered with Perrier and Bugaboo), Dior has utilized some of Warhol’s early hand drawn work from the 1950s in his Fall/Winter 2013 collection. “For me Warhol made so much sense,” Dior creative director Raf Simons said of the collaboration on Dior’s website. “I was interested in the delicacy and sensitivity in the early work he did, I was drawn to that graphic style naturally in this collection. It was that notion of hand work and personal signature that fitted throughout.”  Particularly, Simons worked Warhol’s “Stamped Shoe with Butterflies 1961,” “High Heel,” and “Shoe 1955” onto several handbags and silk dresses.

The collection as a whole is truly a nod to the label’s founder. Christian Dior himself was an avid art enthusiast, a close friend of many artists, and a gallerist prior to his move into fashion. The collection centered around a theme of surrealism, with the art of Dali and Giacometti serving as much of his inspiration. The notions of Surrealism and Pop through Warhol’s drawings were brought together in what was referred to in the show dossier as a “scrapbook.” To top it all off, the dreamscape of the show’s set brought to mind Magritte with a cloud-covered path winding around large mirrored spheres.

A satin clutch with a Warhol shoe drawing

A tote with a similar motif

It is a long-documented fact that Christian Dior loved artists, befriending Jean Cocteau, Christian Bérard, and Max Jacob to name a few. Because of this history, the brand has often strived to continue his legacy by collaborating with artists on various projects. For its latest endeavor, the House of Dior has tapped Vincent Beaurin, the French sculptor and painter, to create an original makeup palette for spring. Beaurin has proven to be a favorite of the brand, having reinterpreted the Lady Dior bag in 2010 for the “Lady Dior as seen by” traveling exhibition.

The Bastet Eyeshadow Tablet, as the palette has been named, was inspired by the Egyptian divinity Bastet, the goddess of music, dance, feasting, and love. Chicly enclosed in a magnetic case lie a trio of electric eye colors, including a warm red, bright blue, and mustard.  The work of art (if you will) retails for $210, and can be purchased on dior.com.

While sister Cara definitely had quite a year in 2012, modeling in the biggest runway shows, starring as the face of numerous ad campaigns, and being named model of the year at the British Fashion Awards, my style obsession lies with the older Delevigne. She can transition from street style to boho chic to glitz and glam so effortlessly, all the while making the look her own. This natural beauty was one of my favorites to watch in 2012 and I expect a lot more from her in 2013.

One of my favorite looks. Topshop pants

How many people do you know who can pull off cat ears? In Chanel.

In Chanel at the Met Gala. 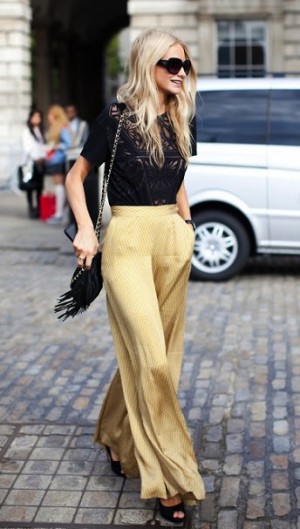 Delphine Arnault, deputy general manager of LVMH, has commissioned French sculptor Jean-Michel Othoniel to design a limited Artist’s Edition of their fragrance J’adore Absolu. The artist, whose work Arnault collects, was given cart blanche to create a fine art object for this holiday season. The final design, shown below, was handcrafted in Murano, Italy.

Othoniel currently has an exhibition at the Brooklyn Museum of Art entitled “Jean-Michel Othoniel: My Way,” which surveys the twenty-five-year career of artist.  The show, which includes “embellished heraldic banners, Murano glass sculptures, and magnified necklaces and knots, which conjure an intensely personal mythology while also evoking the fantasy universe of the fairytale,” runs through December 2. The bottle Othoniel designed for Dior is clearly reflective of the works within his oeuvre in that he turned the bottle into a spiraling sculptural piece. The limited edition fragrance is available now at select Saks Fifth Avenue and Neiman Marcus stores, as well as Bergdorf Goodman. But before you rush to purchase, be aware that this not-so-ordinary fragrance comes with an art-worthy price tag, selling for $3,500 per bottle.

A sketch of the design by the artist; the final Limited Artist Edition of the J’Adore L’Absolu 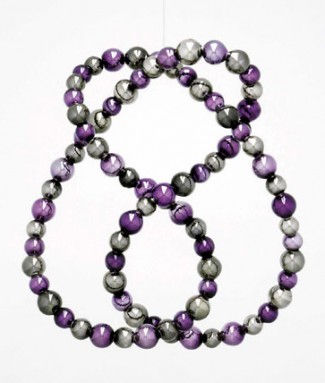 Late last year, Christian Dior teamed up with German artist Anselm Reyle to create a capsule collection of handbags, makeup, and accessories. Reyle’s works are characterised by bold brushwork, neon paint, 80s kitsch and silver foil. He generally builds on objects that already exist, transforming them into his coveted creations, and his approach to the Dior collaboration worked the same way. He started with the silhouettes of classic Dior bags, and covered them with eye-popping, boldly colored camouflage prints contrasted by patent leather topstitching for a modern look.

The collection launched at Art Basel in Miami in December, with a pop up store in the design district. A truck plastered with Reyle’s Dior patterns was parked outside the pop-up – an amazing, moving ad for the collection. And of course the launch would not have been complete without a high-profile party, attended by art and fashion world celebrities and socialites alike.

A boldly colored handbag from the collection

A makeup palette and scar from the collection

I die for these bangles!

The artist at work

A few views from inside the pop-up shop in Miami

There is no other word to describe Raf Simons’ debut couture collection for the house of Dior other than genius.  The pressure was on for the former creative director of Jil Sander, and he certainly did not dissapoint.  The collection was thoughtful and unified, punctuated by reoccuring themes such as the peplum, full skirts, strapless tops, and pointy stillettos.  Simons favored black and navy ensembles, opting for a black tuxedo whose jacket was shaped after Dior’s iconic Bar jacket – one of the most distinctive silhouettes in fashion – for his first look.  This number set the stage for the following architectural, structure-focused looks. Yet he did not shy away from color completely, experimenting with vibrant reds, pastel pinks, and simple patterns for a few dresses, as well as electric yellow long for one sleeve gown.

Engulfing the throng of socialite, celebrities and high profile designers (Marc Jacobs, Pierre Cardin, Alber Elbaz, and Donatella Versace were just a few of those on hand to support Simons’ debut) were endless walls of flowers, which lined a grand Parisian mansion ceiling to floor in a nod to one of Christian Dior’s obsessions.  Five rooms in total were utilized for the show’s large crowd, each designated its own specific color based on the flowers on the wall, including blue delphiniums, white orchids, red and orange roses, and pink roses and peonies.

If this is what Simons can create in just two months at the helm of Dior’s iconic fashion house, it is fair to say that this talented designer has a long, successful road ahead of him.