Damien Hirst – former YBA’er and frequent fashion collaborator (read past posts here and here) – recently collaborated with Miucia Prada on an installation entitled  “Prada Oasis and Damien Hirst’s Pharmacy Juice Bar” as part of a major retrospective of the artist’s work in Doha, Qatar. The pop-up is based on a modern-day pharmacy, though the structure takes inspiration from a Bedouin tent and is thus a little more appropriate for its erection in the Qatari desert.

The installation – which remain open only temporarily to mark the opening of the retrospective – served as a representational revival of Hirst’s Pharmacy restaurant, which opened in 1998 and eventually closed in 2003 due to mismanagement. The “Prada Oasis” portion of the pop-up referred to a connecting store capsule collection of bags co-designed by Prada and Hirst. Each of the “Entomology” series of clear Plexiglas totes contains live insects and were made in editions of 20, with sales proceeds benefitting Reach Out to Asia, an organization focused on improving youth’s access to education in the Middle East and Asia.

The retrospective, entitled Relics, is being held in the Al Riwaq exhibition space and assembles the largest collection ever of Hirst’s work. The show will be on view through January 22, 2014. 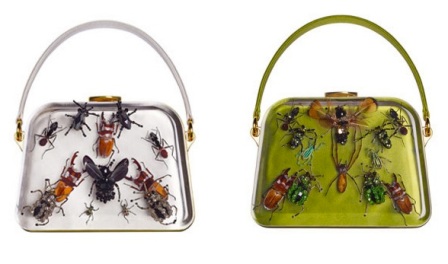 Ladies and Gents, it has been too long. I have spent the past three weeks working crazy hours at work and then taking a much-needed vacation hiking through the Dolomites in Italy. Talk about a breathtaking part of the world. But now it’s back to reality, with Fashion Week already in full force here in New York, and galleries preparing for their fall show openings. And me, I’m back to blogging, starting with a major art + fashion collaboration for the Fall season.

Alexander McQueen has enlisted British artist Damien Hirst (who, you might remember, recently collaborated with the Row on a line of handbags) to create 30 limited-edition scarves in celebration of the 10th anniversary of the brand’s signature skull print scarf. The collaboration consists of one-off designs adapted from Hirst’s famous “Entomology” series, featuring butterflies, bugs, and spiders all worked into the shape of the geometric McQueen skull motif.

The McQueen skull print became an iconic piece almost immediately upon introduction by the brand’s late founder in the SS’03 collection.  According to WWD, the brand tapped Hirst “because of his shared aesthetic vision, “in which an interest in symmetrical design is combined with strong references to the natural world.” Hirst is also well-known for using skull imagery in his artwork, most notably his 2007 For the Love of God, a platinum cast of a human skull encrusted with 8,601 diamonds. The scarves will be available in November at Alexander McQueen boutiques and online at alexandermcqueen.com. I am sure these will be coveted by fashionistas and art enthusiasts alike, so mark your calendars!

The artist in front of one of his Entomology pieces 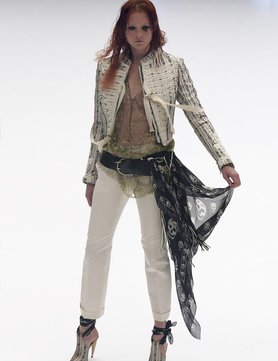 2012 CFDA Award Winners The Row (helmed by Mary Kate and Ashley Olson) have collaborated on a new project with British artist Damien Hirst. The partnership was initiated by Just One Eye‘s co-founder Paola Russo, whose main goal is to nurture the work between artists and unique mediums. The collab marks the first of a series of curated artistic partnerships for the Hollywood retail concept store.

After a year since the project began consumers can now purchase the resulting goods: 12 versions of The Row’s iconic Nile crocodile backpacks uniquely hand-painted and signed by Hirst. And while we all know crocodile-clad accessories fall into the luxury goods category, one of bags – a true fusion of fashion and fine art – will set you back $55,000. That hasn’t stopped Hollywood and the art world’s finest from snatching one up – according to WWD, many have already sold since the launch event at the store last week. Next up? Just One Eye’s next collaboration in the series involves Converse and an esteemed artist. Stay tuned!

Saatchi Gallery UK’s current exhibition, “The Art of Chess,” features 16 contemporary artist interpretations of the boardgame.  The works were commissioned by art organization RS&A upon the recognition of a rich historical connection between chess and artists; artists such as Man Ray, Marcel Duchamp, and Salvador Dalí famously incorporated their love of the game into their artwork (you can read more about the history of chess within art history on Saatchi’s website). RS&A first commissioned artists Maurizio Cattelan, the Chapman Brothers, Damien Hirst, Yayoi Kusama, and Paul McCarthy to produce chessboard art in 2001, and they showed the pieces together a few years later. Since that time, the commission has continued with great ambition, and the resulting artworks – by big-name contemporary artists such as Tracey Emin, Barbara Kruger, and Tim Noble – are now on view collectively at Saatchi through October 3rd. 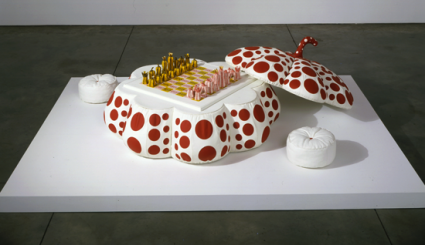 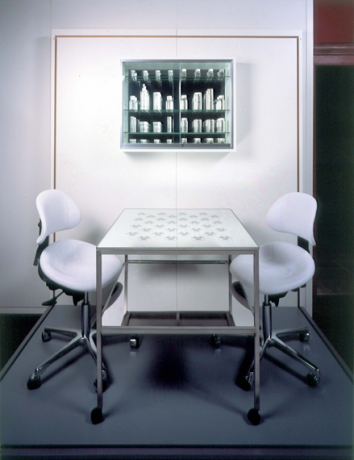 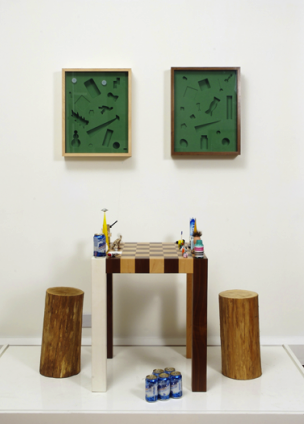 Last week, I wrote about Cynthia Rowley’s Gagosian collection. But the designer didn’t stop there when looking to the art world for inspiration for her designs. Rowley has also created a dress entitled “Damien Hirst Dot Dress,” which she designed for Paris boutique Colette after seeing Olaf Breuning’s exhibition, “The Art Freaks.” The exhibit featured a series of 22 large-scale color photographs depicting nude male and female bodies, which Breuning had painted in the style of various 20th century artists’ defining works. One of those artists was Damien Hirst, and Breuning painted that particular woman with Hirst’s famous “spots” print. Rowley took Olaf’s interpretation one step further, designing a silk jersey t-shirt dress, screen-printed with the faint image of the nude figure, overlaid with Hirst’s colorful spots, as portrayed by Breuning. The dress is now available on Grey Area’s website.